one could say that the australian dj tigerlily is symbolically parallel to the bright, exuberant flower: delicate and alluring on the outside, yet a fierce and wild soul on the inside. the natural beauty is known throughout the edm world to be as fun and playful off stage just as much as she is in her crazy, progressive house sets.

the super genuine, colorful chick has successfully made a huge impact on the dance scene, even alluring people enough that they yearn to have her as their cool best friend. uplifted by pop, pop, and more pop in her early years, tigerlily thrived on disco, new age techno, old-school hip hop, and classic bands like spice girls in the time of the ’90’s that was the “epitome of cool.” while studying at uni in sydney, she simultaneously toured all over her country and learned to love to tackle on challenges. from a production perspective, she draws from people like deadmau5, porter robinson, and “heaps of australian guys that are killing it at the moment, like will sparks, timmy trumpet, flume, and what so not – all people I look up to that are doing really well.”

the outspoken star says it like it is without having anything to hide about the stereotypical male-dominated industry, where it’s unnatural for a woman to be prominent in the scene as one can see from what’s going on in the charts and festival lineups. “there’s a lot more expectations placed on us. it’s hard being a chick, it’s hard to get respect, and it’s hard being a woman on the road. we can’t go out to party every night, because we need to be healthy and look good all the time.” with guys watching a woman’s moves all the time, especially in the spotlight where one’s constantly doing photo shoots and interviews, women need to constantly be on their game in today’s visual-centric world.

aussies and kiwis are generally renowned for wandering to the corners of the world, hoping to see, experience, and explore as much as they can away from home. although she’s traveled to crazy, farfetched places, tigerlily confesses that canada holds a special place in her heart, for it’s a beautiful country “full of beautiful people and incredible shows.” there is even “heaps better music” in america when compared to her native australia. their government has been enforcing tight regulations on alcohol, so many clubs are shutting down, and has led to a decline in chances of performing and playing there. “it’s pretty depressing how australia is becoming a nanny state. besides the fact that americans are more open-minded and ready to party, there’s more diversity and people in the market, which always leads to opportunity and success.” despite the fact that australia will always be very dear to her as home, tigerlily admits that the one american thing she can’t live without are gin gin lolly’s, which are”f-kin’ brilliant.”

away from the madness of it all, the aussie spends her days and nights off spending time in the ocean, sweating it out at bikram yoga, and learning about meditation with a bit of astrology. having experienced a whirlwind of life and travels at such a young age, the free-spirited dj lives to do what she wants and “be f-kin’ happy,” encouraging others to do the same by spreading the positive vibes and love everywhere you go. the spunky star will be touring all over this year and hopes to finally learn speaking french. support her on facebook and spotify. 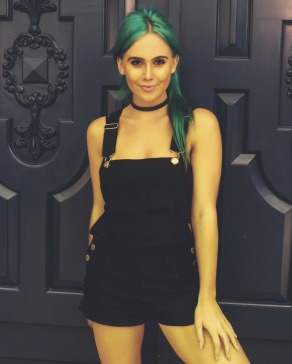