Well-known in the electronic music scene for his stirring DJ sets, extraordinary dance moves, and vibrant outfits, Atish is a risk-taker who first catapulted into this career through his memorable monthly mixes on Soundcloud. With his creativity, magnetic personality, and savvy skills, the beloved artist has emerged from the crowd of countless DJs in the past few years, and it is evident he will continue to surprise us artistically for as long as he can manage.

Over 5 years ago, the former Facebook employee transformed his hobby into a life-changing career as a thriving full-time DJ and producer. Along with performing at his Miami residency Do Not Sit On The Furniture and at various festivals like Burning Man and Desert Hearts Festival, he’s launched his own label, Manjumasi, and clothing line called Peculiar Colors that resembles his bright, animated personality. The expressive DJ also launched a new party series called “Atish All Night” in SF, NYC, and LA, and strives to accomplish as much as he can before settling down as a family figure.

Some unexpected challenges from this new lifestyle include the social effect. The personable character states how “on one hand, you’re constantly seeing and meeting new people, but at the same time, you can still feel very socially isolated. I had my friends who I would see every weekend, but with traveling, you tend to fall off the grid.” Many people in the artistic field often hate on corporate life, but Atish finds himself unexpectedly reminiscing on how awesome the corporate life can be since there are benefits like structure, health insurance, and consistent, predictable hours. Despite these circumstances, the humble artist feels extremely lucky to have people want him play at their clubs and is really grateful for the support and opportunity to be able to fly around the world. Even if the grass may appear to be greener on the other side, the appreciative DJ loves what he does, and hopes that he can do this for “a little bit longer while living the dream.”

Regardless of how much you achieve in your lifetime, it’s hard to determine or quantify when you’ve ultimately reached the peak of your success. In fact, he regularly checks in every so often on Ralph Waldo Emerson’s timeless quote on success, which tends to be defined rather subjectively by each individual. During his off-time, the avid reader finds himself acquiring random knowledge from Wikipedia or enthusiastically playing chess, and whenever he’s not playing his melodic deep house sets, Atish finds himself listening to classic old-school hiphop from the ’90’s and early 2000’s. Although house music is his love, he finds it difficult to enjoy without doing so analytically, whereas with hiphop, he can put it on, enjoy, and not think whatsoever.

If there’s any era the dreamer could experience, it would be the 1960’s here in America. Aside from reveling in the escapades of psychedelic rock ‘n’ roll, he explains how “music had a much more integral role in the shaping of culture and identity than it does today.” Although music still represents a lot to people nowadays, he feels that it was such a deeper part of a cultural movement that can be seen in events like Woodstock as well as the hippie movement. He reveals that even being part of the punk movement in the U.K. or on the East Coast in the 1980’s would’ve been exhilarating, for “that’s where the music was so tightly connected to the cultural movement of rebellion; it was an ethos of noncommercial, do-it-yourself raw attitude.”

With everything that’s communicated on social media, the easygoing character doesn’t preoccupy himself with feeling the need to fit in. Rather, he tries to portray himself authentically as possible by presenting a light of himself that’s not afraid to share his vulnerabilities, and won’t necessarily shy away from things he might feel insecure about. “A lot of people try to put their successes on social media all the time, but I artistically and personally have this itch to always want to be understood, so I feel that the more I reveal about myself, the more people understand me. So I see social media as a vehicle for me to scratch that itch to feel understood, whether that be positive or negative.” Even as a teenager who would regularly perform with his friends in a band, he admits he would do something artistically to get a reaction from people, but now he’s learned to channel that energy more productively. Be sure to support the gifted artist now on Facebook and trend his latest groovy mixes on SoundCloud. 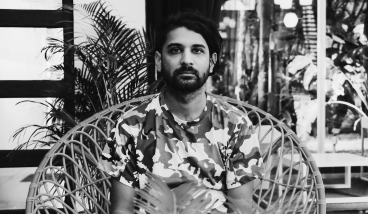 although the seasoned musician @david_berrie loves and is known for his @paradiseprds sound, he shares an appreciation and fondness for the minimal scene as well • “it’s a different world and not as ‘big room,’ but I’d love to try and find a balance or medium of combining those sounds in between • it seems like these worlds are so disconnected from each other when really they could be shared with a variety of people at the same party”
winter skies ✨🔭
“many people write comments online and assume that I prerecord sets, but I actually don't because I play live sets and rearrange all the tracks that I've produced in a new way” @benbohmermusic 💬
“maybe I would be more successful if I put more effort into social media, but for me, it’s all about the music and being in-the-moment • we only live once, so we shouldn’t focus on a screen or anything else that distracts us” ~ @santemusic 💯
if there’s anything you should know about @santemusic, it’s that he’s more fun and lighthearted than the internet otherwise suggests • interview up now 💯
“the electronic dance music scene is hugely american- and european-focused, and although there are pockets of it elsewhere in australia, it’s very exciting to see when other fellow aussies make it across the pond” 🇦🇺 • catch him back on tour this wknd in nyc with @sonnyfodera
Follow Beats of Miami on WordPress.com
%d bloggers like this: