Wise and thoughtful beyond his years, Stefan Pruett introduced himself back in 2015 as The Guidance, a fresh solo music project that represented his thirst for life while fully living through his talents and passions. The Chicago native’s sound exhibits a fusion of genres that ranges from dance to synth pop and grunge, and proves that he’s here to make his mark on the world with his lighthearted views, poetic mindset, and refreshing productions.

Before eventually becoming transfixed by electronic music, the energetic artist started rocking out in punk bands and played bass guitar as a young teenager. While on tour for a different project, his brother passed away unexpectedly, which led him to retool, reinvent, and see things in a new light. This musical rebirth was initiated in order to take his skills up a notch, connect with his audiences, and “bring this elevated, euphoric, and exciting experience to them.” Over the course of 3 years, he’s been producing songs and working on this creative experiment, which culminated to him releasing music through Tommie Sunshine’s label, Brooklyn Fire. Characterized as a mix of distinctive elements like future grunge and “candy goth,” his sound was designed to make it palatable for an alternative audience. “I think a lot of people get dismissive about electronic music, because they only think it’s house music and that it’s too clubby or they won’t understand it. So I try to steer it in a direction where someone who enjoys alternative rock or bands like Phoenix can feel the bridge in the gap there.” What also mirrors his sound is his unconventional fashion flair: colorful and bright mixed with a dark streak aesthetic that is also present in his home of Los Angeles.

Stefan’s stage name, The Guidance, came about as he pondered about how he could be guided through his art. Over the course of his childhood, he’s overcome 3 open heart surgeries and also possesses an implanted pacemaker, which serves as a literal reminder that the young talent operates on a clock. “I never know when this will come to an end or if my work will inspire others, so for me, it was a way of guiding myself through art to keep my mind and spirit alive while sharing that with my audiences.” The natural performer feels that “you’re only as good as your last gig,” meaning that you’re only as good as the work you put out into the world, whether that be through an actual performance or doing something worthwhile in life that involves influencing or helping others. Everyday for the undying optimist, the opportunity to perform on stage is a chance to be hopeful about the future and connect with whatever is right in front of him in that moment of time.

Even though the prominent DJ and producer, Tommie Sunshine, has released almost 360 records, he exclaims how he’s never come across a record like this since he first started the label 9 years ago. “The first time I heard it, it blew me away because it reminded me of something I knew, but also sounded like a new frontier. It’s so rare to have things come across my ears like that because there’s tons of great music out right now, but so much of it is either a little bit of an evolution from trends happening years ago, or a lot of it is current in the now. What he’s doing didn’t exist before, and I find it so rare and special to be a part of.” Although this was Tommie’s 23rd attendance at Winter Music Conference, he felt just as excited as Stefan did since he was able to see the newcomer experience it for the first time through his eyes. After attending his first Miami Music Week and performing at Ultra Music Festival alongside Tommie Sunshine this past month, he plans on touring throughout the country this summer and completing his EP later this year. You can catch his latest single “She Likes the Dance Music” out now on Brooklyn Fire. Be sure to support the enlightened, unique musician now on his personal site and Facebook. 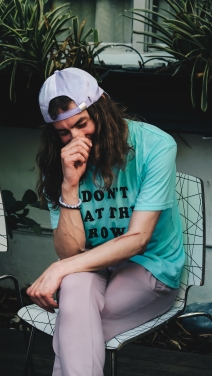