An exceptional figure in the vibrant tech-house world of electronic music, David Berrie is an insightful DJ and producer well-known for his Paradise sound who’s released unparalleled tracks on illustrious labels like Hot Creations, Play It Say It, and Hottrax. Over the last few years, he has progressed across the spectrum of electronic music to that of a more ripened, sophisticated sound from progressive house to minimal and tech house now. The NYC resident vocalized to us his plans for the upcoming months, current thoughts on the scene, and unique ways he stays fresh in his productions.

His worthwhile collaboration with Jamie Jones on their latest track “Doctor Zouk” has catapulted him even further as a Paradise resident. Although the seasoned musician loves and is known for his Paradise sound, he shares an appreciation and fondness for the minimal scene as well. “It’s a different world and not as ‘big room,’ but I’d love to try and find a balance or medium of combining those sounds in between. It seems like these worlds are so disconnected from each other when really they could be shared with a variety of people at the same party.” Because of this, one issue with the scene now is that things are so niche. He illustrates how back in the day, there was only one club and a huge mixture of people would go there. “Nowadays, there’s no diversity and everything is segregated with things like only ‘minimal people’ going to this venue or ‘disco people’ only going to that venue.” Nevertheless, the scene has also been in a lull that’s perhaps spread globally too. “It seems like all the local club venues have been closing down because of this new world we live in with social media where people of this generation don’t necessarily need to go out. They have other social apps they’re using and it seems like people just go out to ‘go out,’ not specifically for the music.”

One of the greatest inspirations for David’s cultivated work is in his studio, the former location of The Loft, which was a quintessential venue that was at the forefront of the disco movement in the 1970’s. If the enthusiast could go back in time, it’d be in the ’80’s or ’90’s so he could experience Paradise Garage, one of the most iconic venues in the world for music heads. “It was like Studio 54 but where all the cool people went to. Larry Levan was an iconic DJ who used to spin there. It was disco, soul house, funk, and it had the most bubbling kind of vibe. From what I’ve heard and seen, it was a whole mix of NYC going there.” There are myriad producers defined and labeled by their signature sound, but the perceptive character believes that that’s not the best strategy for him since he’s motivated and keen on learning new techniques and tricks all the time. “There’s no formula on how to make a track. I’m always trying to reinvent the way I work, and although it takes me much longer to create one, I’m learning so much more in the end. Putting out music is a learning process and I always like to switch up my way of where I’ve started.” Despite fusing together a variety of eclectic genres from his past and present, he tries to avoid going down a specific rabbit hole of music. “I used to love progressive house, but once you get exposed to different things, your palate changes and Sunwaves for me is the finish line. To me, it’s like the Olympics of DJs for minimal and tech-house music. The people are tuned in, the festival sets the benchmark for utmost quality, and the vibe is something unreal that I’ve never seen before.”

While reminiscing, David believed that being a DJ was the best possible job in the world, but what most people don’t realize is how difficult and lonesome it can be at times. “Probably one of the most unexpected outcomes coming into this is breaking away from a normal social life. When I first started getting into production, I threw out my social life and there were times where you have the worst cabin fever. It can feel like you’re going crazy trying to learn new techniques while producing this and mastering that. People don’t realize how solitary you are in how you’re trying to master your craft as a producer and DJ.” It’s a reserved field of work where you especially need to master the art of reading people. “As a DJ, I feel like you’re always looking at reactions and taking in the vibes depending on the scenarios. It’s a lot of thinking and absorbing and taking everything in.” Nevertheless, the humble artist is grateful for his job despite it being different from what he expected.

In another life, the imaginative character could imagine himself being a soccer player if he hadn’t ruptured his Achilles tendon in high school, but nowadays, he enjoys being an uncle to his nephew and nices and supports his sister through her healthy lifestyle bodega, Bonberi. In the coming year, David will be celebrating his birthday in Miami in February and perform some Paradise shows there during MMW before heading to Ibiza in the summertime. You can expect more releases and an upcoming collaboration with Fabe, a German producer who utilizes vinyl and specializes in minimal and house, as well as with Jamie Jones following up from “Dr. Zouk.” Support the candid, accomplished artist now on Beatport and Instagram. 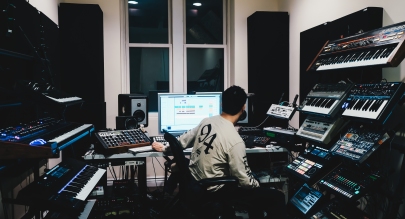